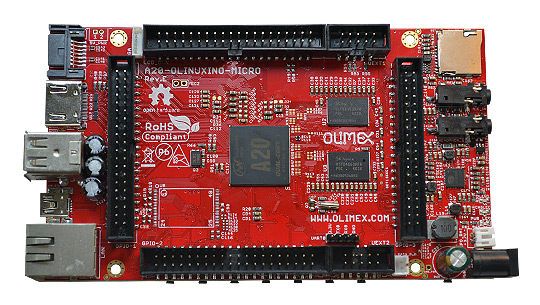 Copy a20_debian_second_release.7z file in your directory and unzip the archive with

where a20_debian_second_release.7z The output should be a new 4GB file with extension img Put 4GB SD card in your card reader and type

The official Debian images are suitable only for microSD card. Information on booting Debian from the NAND might be found at the forum. Download methods and locations might be found below!

The newest release has the following features:

Note: the A20-Debian-SD card which we have in our web store contains the same image on 4GB Class10 fast micro SDcard, if you want to use this image please use card of Class10 speed or the performance of Linux will be very slow.

The Android image has the following features:

What is left unsupported in Android:

A number of very good and optimized A20-OLinuXino-MICRO Debian images by Igor Pečovnik. There are also instructions for NAND installation of Debian: link to his web-sitee] 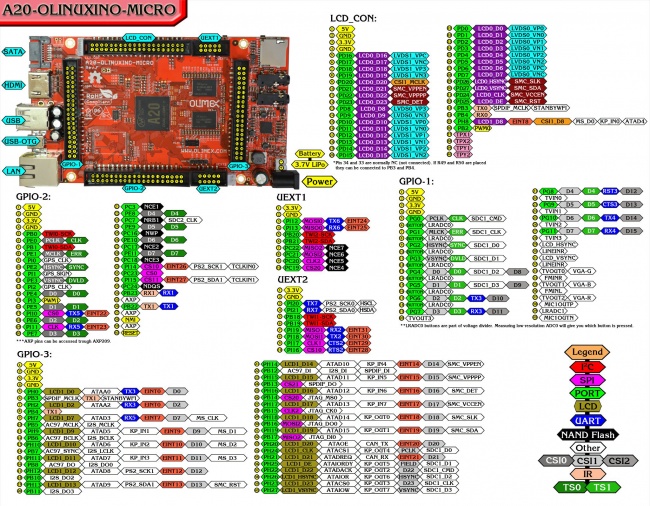 A20-OLinuXino can be powered from three sources: 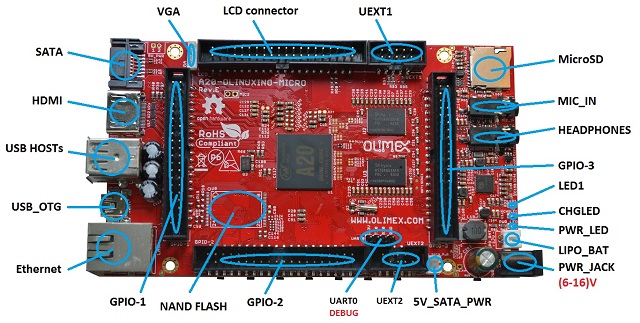 Be careful with TV monitors without grounding

Here you can read how easy you can damage your OLinuXino if you connect it to TV without grounding.

You can read data from a given GPIO port. The logical ranges are usually as follows: 0V-1V for LOW (or 0) and 2.4V-3.3V for HIGH (or 1). All voltages are measured against ground (GND).

If the input signal is to high, you will at least destroy the port!

In order to use A20 GPIO's first you have to export them. You can export a single GPIO:

Example on how to write to a GPIO. For instance - toggle onboard LED. The LED is connected to PH2.

How to generate boot-able SD-card Debian Linux image for A20-OLinuXino?

Official Olimex wordpress article on how to extend the previous build of Debian Linux 3.4 with hardware acceleration support, keep a look at the wordpress for more interesting articles

How do I write the Linux image to a micro SD card to use with my A20 board?

Step by step instructions how to build Arch Linux image

How to install Android on SD-card?

Use our Open Source OLinuXino A20-TOOLS

How to build the Android 4.2.2 image for A20-OLinuXino-MICRO?

Second you need to configure your environment read the instructions here

Then Build the kernel, kernel modules and u-boot

When done, continue with Bulding the android image:

If the problem is under Debian Linux make sure you are properly logged in the LXDE visual interface! Else applying calibration would not happen for the current user - if you are calibrating from the X graphical interface make sure that you are logged as user “olimex” (if calibrating without the X, the user is “root”).