Difference between revisions of "A10s-OLinuXino-MICRO" 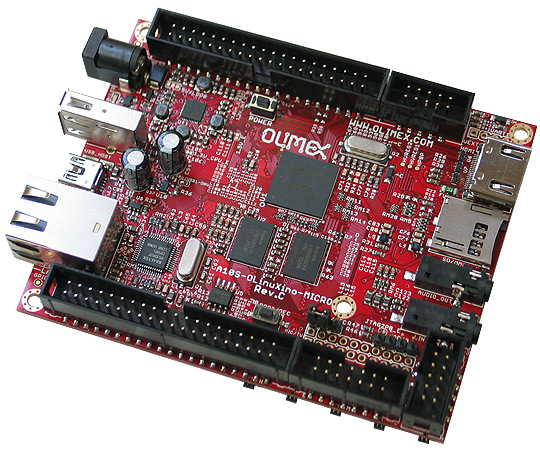 Note: the A10S-OLinuXino-SD card which we have on our webshop contain same image on 4GB Class10 fast micro sd-card, if you want to use this image please use Class10 fast card or the performance of Linux will slow down

Tested hardware with this image:

You have to unrar the file and write the image on 4GB sd card. We recommend class 10 card. You can use dd (under linux) or Win32DiskImager.exe (under Windows) for image writing.

The default Debian SD card setup is made with settings for HDMI 1920x1080. If you want to switch resolutions between HDMI and LCD (4.3'' or 7'' or 10.1'', respectively with native screen resolutions of 480x242, 800x480 and 1024x600) then you have to replace the existing script.bin file from the first SD card partition (note that this partition is FAT - so you can replace the file under Windows or Linux) with the script.bin file from script_a10s_linux_HDMI_xxx directory (for HDMI resolution mode) or from script_a10s_linux_LCD_xxx directory (with the desired LCD resolution mode).

Note that these A10s-MICRO scripts are not compatible with the A10 boards. Please check the A10s wiki article for such scripts.

For Android you need a new image created with the proper screen settings.

How to generate SD Debian Linux image with Kernel 3.4

How do I write the Linux image to a micro SD card to use with my A10S board?

For instance you have an image with the file name of "debian_4g.img". It would be downloaded to the SD card connected to a Linux machine using one of the following commands:

How to change HDMI and LCD resolutions?

The default SD card setup is made with settings for HDMI 720p/60Hz. If you want to change to some other LCD or HDMI resolution then you have to start change_display.sh script file in /root directory.

and choose the resolution and the interface(LCD, HDMI or VGA). Note that the selection of a specific resolution is done by navigating with the arrow keys and pressing "space" button. Make sure the asterisk marks your selection properly.

Note that you have to calibrate touch screen after changing LCD resolution in the script.bin type:

and calibrate the LCD touch screen you can test the calibration using ts_test.

and finaly you hsve to reboot the board in order to use the touch screen in X environment.

Q: I plug my mouse in the board's only USB and it is not working under Debian. I also tried with my keyboard - still no success. Is my A10s board broken?

A: No. The problem is on software level! Low-speed devices such as mice and keyboards doesn't work as expected with the USB-host interface under Debian. You can go around this problem if you plug an USB hub (USB splitter) in the board. Then plug your low speed devices to the USB hub. Now they should work properly. EDIT: This has been fixed by Hans De Goode here: Link to the sunxi's github

Q: How to download new Android image to the NAND memory of my A10s board?

A: To repair the image on the NAND re-upload it following these steps:

2. Hold down “BOOT/REC” button on the board

3. Connect the board to the computer via the mini connector of the USB-OTG

6. You will be asked for drivers for the bootloader. Navigate to the folder where you extracted the LiveSuit and install the drivers from the respective executables (or manually point the installer to the drivers folder in the LiveSuit installation path).

7. Choose the image you have prepared or downloaded

8. Update and don't disconnect the board until the LiveSuit program confirms the update is complete

Q: How do I upload a Linux image to an SD card which I want to use with my A10s board?

A: To write a Linux image to an SD card under Windows we use Win32 Disk Imager: